Similarly, chorizo also comes to mind. I wouldn’t say that Chorizo is out of fashion, but I do remember a time when its popularity was certainly higher than it is now. Pasta dishes, pizzas, and even burgers became saturated with the traditional Spanish meat. Its popularity having perhaps plateaued somewhat in the past few years, it still remains a versatile cooking ingredient.

Both chorizo and thai sweet chilli share a common trait. Both flavours can be dominating, to the point of overwhelming. I’ve had thai sweet chilli chicken stir-fry which was far too sweet and sickly to realistically finish. I’ve eaten a burger with a giant slab of chorizo, oozing with grease, which made everything else on my plate obsolete as far as being able to taste them was concerned. The need to include it on the menu seemingly overriding judgement on the quantity of such an ingredient.

I suppose we should talk about pulled pork.

Pizzas. Burgers. Sandwiches. Sundaes. You name it, chances are, there will be pulled pork.

And yes, pulled pork sundaes are a thing.
Slow cooked pulled pork in a sweet BBQ sauce underneath a crowning scoop of cheesy mashed potato, finished off with rashes of streaky bacon. 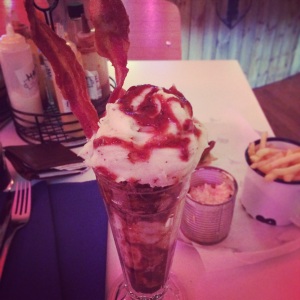 It was too good to be true. However, the guilt combined with the impending indigestion was enough for me. On that day, I reached the pinnacle of pulled pork. I’ll be honest, I haven’t ordered pulled pork in a restaurant since.

The growing influence of American-stye, slow cooked BBQ meat is on the rise. With each tender mouthful, you can almost taste the time and dedication that goes into a slow cooked rack of ribs. Considering the breadth of literature appearing to dissuade us from eating red meat, this is an interesting direction for food.

I have tried to cut down on meat in general. It’s not the easiest of tasks but you’d be surprised how much mushrooms can make up for meat.

I had some leftover shiitake mushrooms, so I grilled them and added some chopped spinach and parsley. I served with a poached duck egg on some brie and crusty white bread. No meat in sight.