Given that game meat is currently enjoying its annual time in the spotlight, it would seem rude not to post something that can be made with any game meat you fancy.

This partridge with artichoke & parsnip rosti dish is finished with crispy sage leaves and a vibrant pepper sauce.

I even went as far as to substitute the meat entirely for baked celeriac, in a vegan version. Either way, this recipe is a good excuse for exploring the taste of Jerusalem artichokes together with a bittersweet molasses & red pepper sauce.

With whole game birds widely available in any butchers at this time of year, it’s often worth buying them whole and separating the breasts, whilst keeping the carcass for a simple game stock in the future. Youtube is full to the brim with tutorial videos on doing just this. As long as the knife you’re using is sharp, this shouldn’t be too arduous at all.

Start by boiling your parsnip and artichoke in some well-salted water with the bay leaves for 15 minutes.

Remove from the water, and leave to cool on some kitchen paper for 30 minutes. Grate them into a large mixing bowl, adding another pinch of salt and black pepper.

In a frying pan, heat some oil with your shallots, garlic and mustard seeds on a medium heat for 10 minutes, or until the shallots just start to colour. Allow to cool and then add to the mixing bowl. Finally add your yolk and thyme. Mix together until malleable.

At this point you can place the mix in the fridge to cool for a couple of hours, this will make it easier to form the rosti later.

Place your peppers under a hot grill and turn regularly until charred on each side and well cooked. Remove and allow to cool. Add to another mixing bowl with one garlic clove, a squeeze of lemon juice, salt, the molasses and the walnuts. Add a good glug of nice olive oil, and blitz until very smooth and set aside.

When the time comes, set your oven to 200 degrees celsius. Form four circular patties from the rosti mix.

Heat some oil and a knob of butter in a large frying pan and fry your sage leaves a over a medium heat until just starting to crisp. Add a pinch of salt before removing and setting aside.

In the same pan, over a high heat, cook the rosti for around 5 minutes on each side, or until turning golden. Place in the oven to warm through for 10 minutes.

Add your well-seasoned game breasts to the pan skin-side down, and gently bring up the heat to medium-high for 5 minutes. Cook for a further three minutes on the other side. Leave to rest before thinly slicing.

Assemble your rosti with the meat and sage leaves along with the warm red pepper sauce. 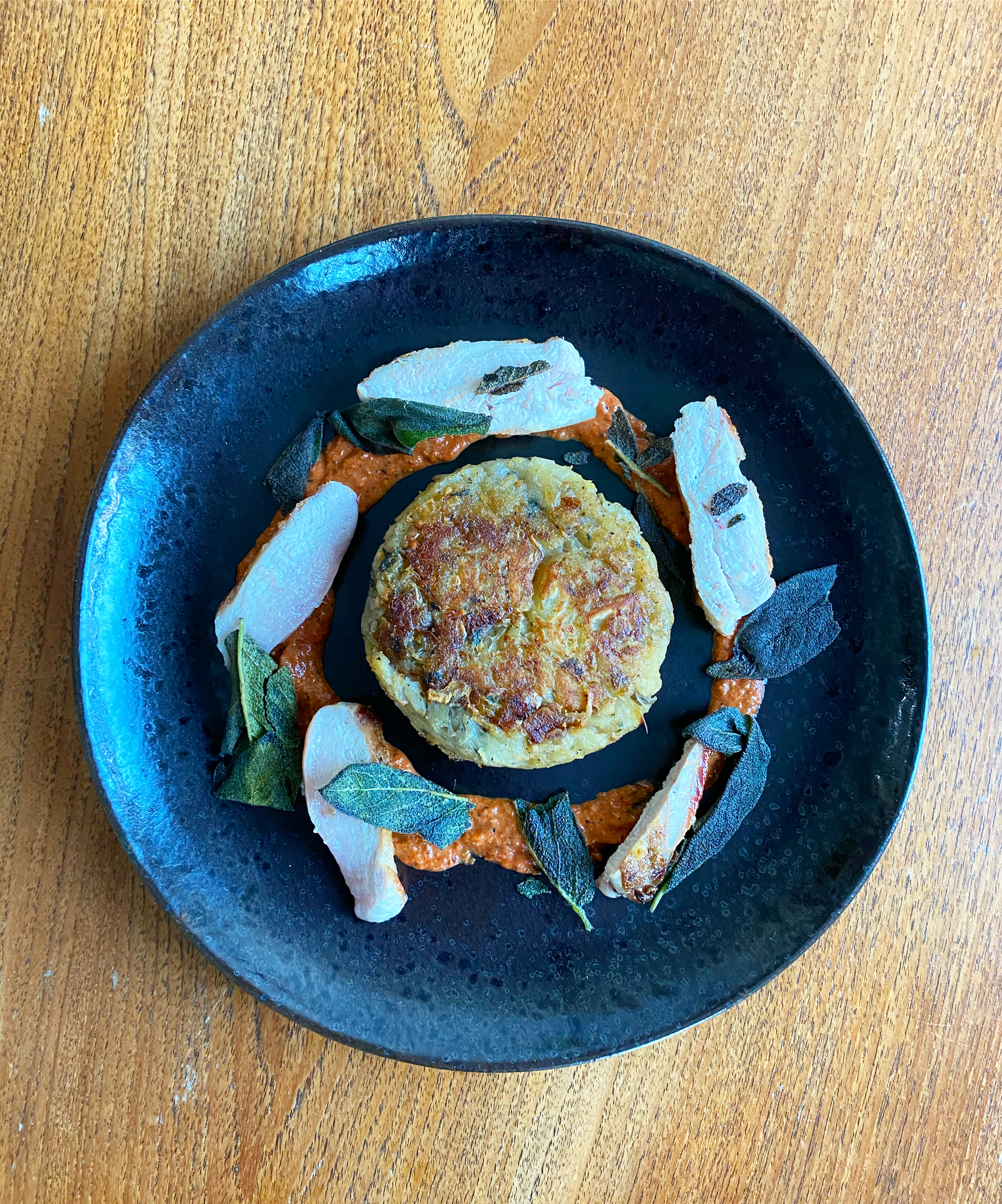